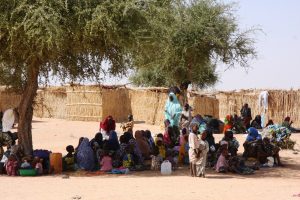 Boko Haram insurgency began in 2015 in the border region of Diffa. Though the attacks decreased in 2017 and 2018, the end of 2018 and 2019 saw an increase in violent attacks in the region. It has led to the death of many civilians and displacements of about 18,000 people in March 2019. Diffa city currently has over 300,000 displaced persons and refugees. The attack has led to the closure of schools, and children are at risk of being exploited, kidnapped, or recruited into the armed group. Girls are at risk of being forced into early marriage. Children who are displaced by conflict repeatedly are prone to trauma, anxiety, or depression.

The impact of the attacks extends far beyond education, affecting every aspect of life in the region. The increase in the number of IDPs and refugees has put a strain on the availability of food, healthcare, WASH facilities, and shelter. It has led to overcrowding in camps and host communities, thereby increasing the spread of diseases. Most of the households lack access to clean water.  The available water point is located at a far distance, thereby exposing women and girls to violent attacks such as rape, kidnapping, and abuse.

Humanitarian aid in the areas of health facilities, clothing, a makeshift shelter, and water must be available to the host communities.

On 19th February 2020, UNICEF released a statement indicating that roughly three million people in Niger are in urgent need of aid. Alarmingly, more than half of those requiring this humanitarian assistance are children.

Nearly 1.4 million children were displaced in Nigeria and neighboring countries, due to the violence carried out by Boko Haram (an Islamist militant group). UNICEF’s Regional Director –  for West and Central Africa, Mr.Manuel Fontaine, pointed out the tragedy thusly, “’ Each of these children running for their lives is a childhood cut short… It’s truly alarming to see that children and women continue to be killed, abducted and used to carry bombs.’”

Along with the government leaders and other NGOs in Nigeria, Chad, Cameroon, and Niger, UNICEF is expanding efforts to assist thousands of children and their families in these terror-struck regions. They are hard at work providing access to safe water, education, counseling, vaccination, and treatment for acute malnutrition. Despite these expanded programs, the increasing number of refugees and the limited resources available have put a tremendous strain on organizations seeking to provide life-saving assistance to these refugees. With the added challenge of COVID-19, the need for aid is more urgent than ever.