Build It for Ourselves: Interview with Magaajyia Silberfeld 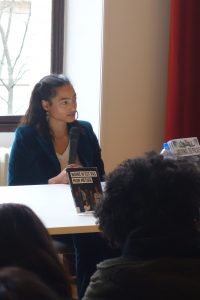 “I grew up watching films and wanting to not only be in them but make them too,” is how Magaajyia Silberfeld describes her passion for filmmaking. She is the daughter of French journalist Antoine Silber and Rahmatou Keita, a Nigerien journalist, writer, and film director, whose work includes “The Wedding Ring,” in which Silberfeld starred. She was born in Paris, but spent her childhood traveling with her mother throughout Niger, Mali, Greece, and the United States[1]. At the young age of 14, Silberfeld made her acting debut in Geraldine Bajard’s 2010 film “The Edge.” By the time she was 18 years old, she had directed her first short film, “Me There.”

Silberfeld studied theatre at the Conservatoire de Paris and earned a Bachelor’s Degree in Philosophy at the Sorbonne. “Ride or Die,” which she produced and co-directed, won Best Ensemble at the Queens World Film Festival in 2015. Her short film “After School” won the Rhode Island Best Directorial Award. In 2017, she wrote, directed, and starred in the short film “Vagabonds​,” which explores familial and social conflict in the life of a young woman living with her Nigerien uncle and his American wife. Currently, she is developing two shorts and a feature in addition to acting as the lead in a short film.

Silberfeld graciously took time out of her hectic schedule to answer my questions about the challenges of her work, which include contending with race and identity issues as a biracial actress, struggling to secure funding, and coping with the lack of a strong local film industry in Niger.

In 2016, she played the lead in The Wedding Ring and participated in the production process. Producing a film in Niger had unique challenges due to the negative perception of female actresses: “People look at our work like it’s “haram” (forbidden),” she says. “When I was helping Rahmatou Keita cast The Wedding Ring, most people were turning us down specifically because of that.” In the Muslim world, she explains, actresses are considered prostitutes, and women who do not wear hijabs only add to the difficulty. But her mother’s influence has given her resilience in pursuing her dreams: “My mother is a documentarist, but the way she goes about things and how proactive she is has definitely inspired me. She never gives up. I get that from her.”

Silberfeld describes the frustration of being multiracial, which in the film industry means not being able to fit into any racial category: “You’re 99% not what people want. You speak English but your accent isn’t American enough. You speak English but your accent isn’t British enough. You’re mixed but they want a darker girl. You’re mixed but they want a whiter girl.” Instead of succumbing to despair, her solution is to direct films of her own: “I’m not trying to be pessimistic, but let’s face it: the industry was not built for us. So we have to build it for ourselves. Or rebuild it.” She raised awareness about sexism and racism prevalent in the French film industry by writing an essay for the anthology, Noire N’est pas Mon Métier​ (Black is Not My Job), and joining the book’s authors in a protest at the 2018 Cannes Film Festival[2].

Faced with an entertainment industry that caters to certain racial motifs and echoes worn-out discriminatory stereotypes, Silberfeld urges young actresses to tell their stories and create art, even if it means producing their own films when the film industry resists their uniqueness or lacks sufficient state funding, as is the case in Niger. Her advice to Nigerien girls interested in an acting career is simple: “Become a filmmaker, or even a producer, and put yourself in your own films. Don’t wait around.”

For girls growing up in a country where one in seven children dies before the age of five, the future can seem bleak. Wells Bring Hope is determined to build a future for Nigerien women and girls by drilling wells that provide fresh water. When that essential need is fulfilled, resources can be allocated towards health education, microfinance training, and perhaps, the pursuit of dreams like filmmaking. Join Wells Bring Hope in empowering Nigerien families to build sustainable lifestyles that will continue to benefit them for many years.