While Niger provides habitat for some of Africa’s most notable wildlife species, such as the hippopotamus and Nile crocodile, the country is also home to many lesser-known yet critically endangered species. It’s clear Niger’s rare desert species are in dire straits: Only about 100 addax desert antelope are left in the wild, and approximately 600 wild West African giraffes remain. 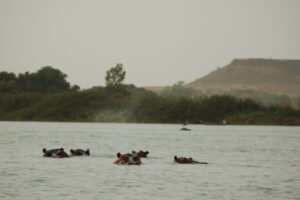 Why is Niger’s wildlife in decline?

Since Niger’s wildlife thrives in arid, seemingly uninhabitable conditions, it is reasonable to wonder why the populations of these resilient species are declining at such rapid rates. If an addax antelope can flourish in terrain that receives less than five inches of annual rainfall, then why are there now only 100 left in the wild? The rapid decline of Niger’s wildlife cannot be blamed on natural causes. Rather, it is due to the persistent ways in which humans damage the natural world.

Multiple factors have contributed to Niger’s loss of desert wildlife. Some desert species have been decimated by the rise in poaching by hunters in motorized vehicles during the last quarter of the twentieth century. Uncontrolled hunting has reduced the ranges of these species even more.

Habitat degradation is another major factor contributing to wildlife loss in Niger. The nation loses about 100,000 hectares of agricultural land each year. And land degradation from agricultural pressure is only increasing with the growing human population. Because of unsustainable farming practices, Niger’s soil is eroding at catastrophic rates, which increases the intensity of droughts and floods. As organic matter is depleted from soils, rainwater is not able to penetrate beyond the surface. This means floods during the rainy season are significantly more intense—impacting both humans and wildlife.

Why does it matter?

Many species of wildlife play critical roles in human and ecosystem health in Niger. The annual arrival of the Abdim’s stork, for example, signals the impending start of the monsoon season to villagers. While many positive environmental practices may seem to only benefit wildlife, eco-friendly actions provide immense benefits to humans too. For example, improving the sustainability of agricultural practices would limit soil degradation, reduce the intensity of floods, and save the lives of both humans and animals.

What is being done?

With a combination of hands-on environmental and educational projects, it is entirely possible for people and wildlife in Niger to coexist successfully. Community-based projects are not only protecting Niger’s wildlife, but they are also educating people about the importance of conserving wildlife.

In 2006, 26 communities gathered together to plant Acacia Senegal trees on 7,200 hectares in Niger, which expanded wildlife habitats and enabled carbon sequestration. In 2020, those communities earned $450,000 from the World Bank for their greenhouse gas sequestration project.

The money is now being used for school supplies, health posts, agricultural equipment, and more. This project shows that wildlife conservation success is not achieved through one single solution but rather through a multifaceted approach that involves humanitarian and environmental efforts.

Wells Bring Hope employs this same multi-factor approach when drilling wells in rural villages of Niger. After a well is drilled, villagers are taught hygiene practices and drip farming techniques. The wells eliminate the need for women and girls to walk for water, which means girls can go to school and women have time for income-generating work. As a result, more people can be educated about sustainability and the importance of conserving Niger’s wildlife.

Both of these projects involve humanitarian and environmental efforts. They show that the natural world provides resources to humans, while humans also have the ability to improve the state of nature. It is easy to read dire news reports and remain apathetic about environmental problems faced in Niger, but one thing remains certain: Organizations like Wells Bring Hope are not only transforming villages, but they are also instilling hope for the future of conservation in Niger.

In Niger, a ‘crazy idea’ to restore degraded land pays off (worldbank.org)