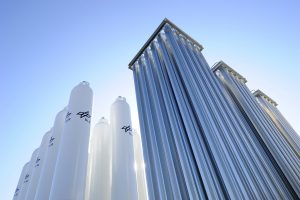 Because of its extreme flammability, hydrogen can be a challenging fuel source, but its value is predicted to rise in coming years due to its potency and unique ability to serve industries that are reluctant to make the switch from oil to electricity.

Green hydrogen could be the missing link between a world that runs on oil and one that runs on renewable energy.

What is green hydrogen?

Hydrogen, as a fuel source, comes from adding electricity to water to separate the oxygen and hydrogen molecules in a process called “electrolysis.” The hydrogen that gets released during this process can be captured and used as fuel, providing approximately three times more energy than oil and natural gas.

Hydrogen is considered “green” when the electricity used to produce it comes from a renewable source like solar panels or wind turbines. When hydrogen is burned it does not release carbon dioxide, so it doesn’t contribute to climate change the way burning oil or natural gas does. The entire process, from creation to utilization, has the potential to be emissions-free.

Hydrogen has unique benefits like its ability to be stored for long periods of time. It’s also good fuel for demanding industrial processes like steel and concrete production because of its high energy potency. While the transport of hydrogen can be dangerous, much of the existing infrastructure we have for natural gas can be repurposed to move hydrogen.

What about the water? 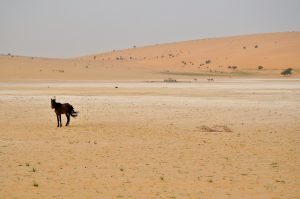 You may be thinking: Why develop a water-dependent source of energy in a place with so little water? Although EEC and other investors still need to prove that green hydrogen development will not come at the expense of an already water-deprived nation, there are a few arguments in favor of developing green hydrogen in Niger.

Firstly, although fresh water is required to make hydrogen through electrolysis, it doesn’t need to be clean water. “Wastewater” from various industries can be recycled to produce hydrogen. As one Yale researcher put it: “We have all of these underutilized sources—treated wastewater, resource extraction wastewater, industrial wastewaters that we could treat… We may not want to use them for drinking water, but we could use them for other purposes, and that would save the drinking water for drinking, which is especially important for water-scarce areas.”

Another possibility is the increasing development of desalination, which is a process that turns salt water into freshwater. In fact, a report from the International Renewable Energy Agency indicates that even for a landlocked country like Niger, the development and transport of desalinized water could still be cost-effective: “Even in regions far from the coastline, water transport could be considered, which will increase the cost of water supply, but it will still represent a relatively small share of the total hydrogen production cost….” For this reason, and the fact that hydrogen requires less water to create than natural gas, researchers even suggest that green hydrogen could alleviate global water shortages instead of exacerbating them.

The last point of concern is equity. If green hydrogen proves to be feasible in Niger, millions of dollars would be poured into the country to develop the market, which could lead to further investment in other energy sources and water sanitation expansion. But in a country where only 19% of the population has access to electricity, and only 56% have access to a source of drinking water, it’s vital that these energy developments do not come at the expense of ordinary citizens and that they share in reaping the benefits.

Hopefully, the EEC will be able to find a partner who can provide convincing answers to these difficult questions and help propel Niger into a fruitful and sustainable future without leaving ordinary Nigeriens behind.