In an effort to encourage you, dear reader, to part with hard-earned cash for a water system for the Kelloum Bawa Health Care Facility in rural Niger, I’m going to take you to… Vienna General Hospital in around 1846. That seems like a logical route, right?

Around this time, medicine was progressing from the glorified butchery that characterized the profession in the years preceding this period to a more data- and observation-based science. Vienna and its General Hospital were at the forefront of this advance. 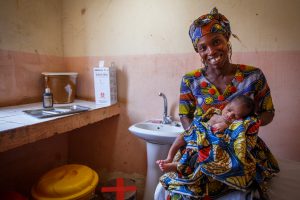 This was a point in history where giving birth at a hospital was regarded as a last resort because all too often, an otherwise healthy woman would come into the hospital, have her baby and swiftly develop a fever that would progress to convulsions and eventually death. This horrifying death was commonly called ‘childbed fever.’ Giving birth in a hospital was seen as incredibly risky. In some of the worst months, up to 30% of the women who had their babies in hospital wards died of Childbed Fever.

It took a young doctor from Hungary called Ignaz Semmelweis to identify the cause of this deadly problem. Dr. Semmelweis, being a curious student, dove into hospital records and realized that there was an anomaly in the death rates between the two maternity wards at his hospital. One ward was run by some of the best doctors in the world at the time, the other was run by midwives. It probably will not shock you to learn that the death rate was significantly lower on the ward run by midwives. The why, was the fascinating part. Basic hygiene.

A doctor in a teaching hospital would typically start his day conducting autopsies to expand his knowledge of human anatomy before moving on to his daily work. For Dr. Semmelweis that was on the maternity ward delivering babies, the maternity ward with the horrifying mortality rate. Handwashing was not a commonly used practice, but Semmelweis soon realized that washing his hands in a diluted bleach solution made a significant difference in his patient outcomes. This intervention brought the death rate down close to zero.

Unfortunately for Ignaz Semmelweis his ideas were not wholeheartedly adopted at first, but today it is a given that having a clean environment to perform medical procedures saves countless lives. Most of us cannot fathom a world in which medical professionals aren’t engaged in near-constant hand washing. Clean water is absolutely essential to this fundamental best practice. 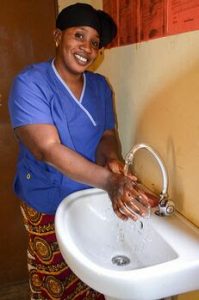 Returning to present-day Kelloum Bara, patients at the clinic need clean water to make undergoing a medical procedure a significantly less risky proposition. The clinic is currently drawing its water from two open wells which are all too often contaminated. A mechanized, solar-powered well drilled by Wells Bring Hope donors will provide running water to the Kelloum Bara Health Care Facility as well as a safe water source for the nearby village of Kelloum Bara. With this water system will come hand washing station inside the clinic that will help ensure that patients aren’t subject to the same fate as the women of 19th century Vienna.

In February of this year, a solar-powered mechanized water project was completed at Kawaye Health Center, thanks to Wells Bring Hope’s generous donors.  This is an intervention that almost 200 years later, would have made Dr. Ignaz Semmelweis proud. It has made the people of this community in rural Niger proud that their health care facility now fits more with the modern world than the bygone era of 19th century Europe.

Please donate today to the gift of good health.