International Decade for Action on Water for Sustainable Development, 2018-2028

“Access to water and sanitation is a precondition to life and a declared human right.” – United Nations

As evidenced by the frequency with which it appears in the Sustainable Development Goals, access to clean, well-managed water, for both consumption and sanitation, is vital for human development. Any level of water scarcity creates a major threat to health and nutrition. It is also a major impediment to social change, particularly around issues of gender equity. Water is at the center of sustainable development. As of 2018, 40% of the world’s population suffers from some form of water scarcity, be it for drinking or for cleaning. This dramatic deficit is the result of a number of factors, including expanding populations, climate change, and natural disasters. The World Economic Forum, which ranks global risks, listed water crisis in the top three for third consecutive year.

Due to the urgency of this issue, the United Nations General Assembly proclaimed the period from 2018 to 2028 the International Decade for Action on Water for Sustainable Development. This is a necessary step to ensure that all UN member states achieve the ambitious goals set in the 2030 agenda  for increasing access to safe water. Through this program, all UN members are encouraged to respond to the water crisis as efficiently and effectively as possible, and to make a concerted effort  to reach the collective goal of eradicating water scarcity around the world. Goals for this decade, which concludes on World Water Day 22 March 2028, have been built on the achievements of the previous “Water for Life” decade which took place from 2005 to 2015. 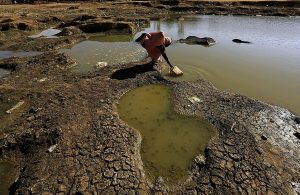 The “Water for Life” decade was considered successful by many as it focused the attention of the international community on the water crisis, and made improvements seem attainable. Prior to this decade, the water crisis was complicated by technical discussions that did a poor job of outlining how water is related to other areas of development. The focus on “Water for Life” sparked conversations which made clear that water-related issues had to be on the political agenda, both locally and internationally. Further, the decade put mechanisms in place that created specific plans for the implementation, monitoring, and evaluation of water-related objectives. The improved coordination on water policy paved the way for the International Decade for Action on Water for Sustainable Development.

The new decade, which underlines the importance of intergovernmental coordination, includes a  number of country-level implementation mechanisms that support action at every level (private, social, NGOs, and governments). Using the knowledge gathered through the “Water for Life” decade on the various dimensions of inequality related to the distribution of basic water, sanitation, and hygiene services, the International Decade of 2018-2028 is working to achieve equality in areas related to wealth and gender in order to support successful improvements in water accessibility for everyone.