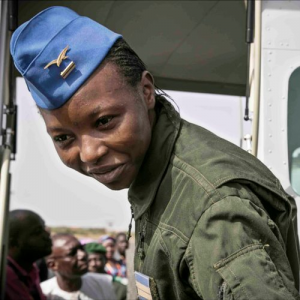 Around the world, women are often severely underrepresented in aviation. The thought of a pilot typically conjures an image of a male in a uniform with epaulettes and insignia. Despite women having been involved in the origins of aviation and aircraft development, women represent a mere percent of all pilots across 34 major global airlines, according to the International Society of Women Airline Pilots in 2018.

However, countries like Niger are experiencing a shift in the aviation status quo. In recent years, Captain Ouma Laouali has been breaking barriers and improving gender equality in aviation in her home country of Niger. On October 21, 2015, at the age of 28, Laouali became the first female pilot in Niger and served with the Nigerien Air Force. This was a pivotal moment for all aspiring female Nigeriens who dream of becoming pilots.

Captain Laouali, when reminiscing about the origins of her desire to become a pilot, commented that to fly was to be like a bird in the sky and to have the opportunity to see a unique, larger view of the world. She also acknowledges the burden present in representing female Nigerien pilots and paving the way for other women in her country desiring to become pilots like her.

As of 2020, Laouali has accumulated around 2,600 flying hours and recently successfully finished the U.S. Air Force’s C-130 Formal Training Unit’s training program located at the Little Rock Air Force Base in Arkansas, U.S. She is now a certified C-130 Hercules pilot and will undoubtedly continue on to earn more accolades and accomplishments as a female Nigerien pilot.

Her spirit and drive will inspire all women who want to become pilots and pursue a career in aviation, regardless of where they are from.