Looking only at statistics, it is easy to misconceive that Niger is a nation that cannot produce great literature. Literacy rates among young people aged 15-to-24 years old are 36.43% and 17.15% for males and females respectively[1]. Literacy rates are especially low for women; just 11.04% of the adult female population.

But Professor Antoinette Tidjani Alou has proven that Nigerien women have their own unique female narrative to share with the world. She is widely known for her research on African oral literature, African studies and gender studies at the Universite Abdou Moumouni de Niamey in Niger. Her literary focus over the past twelve years has been on female Nigerien authors. In fact, in 2017, she was the first Nigerien to participate in the International Writing Program, a writing residency for international artists in Iowa. She also participated in “Women Writing Africa” [2], a literary research project that featured songs, poems, and significant oral texts by African female authors. “Women Writing Africa” brought female African literature out of obscurity and into the limelight, allowing African women to reclaim their stories from the stereotypes and prejudices that had obscured the brilliance of the African female experience. 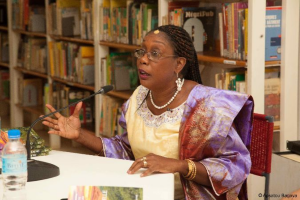 Born and raised in Jamaica, Professor Alou completed her doctorate in France but has lived and worked in Niger for most of her adult life. Her multicultural background and diverse experiences don’t detract from her platform as a spokeswoman for Nigerien women. Rather, they are representative of Niger’s racially diverse population and multicultural society. She considers herself “a Global African whose adult life, work experiences, struggles, hopes, and dreams have all evolved in Niger, among in Niger and people of whom I consider myself to be a normal everyday citizen”[3]. Her most well-known French novel[4], On m’appelle Nina[5], portrays Nigerien women struggling with issues of race, femininity, and motherhood in the contexts of interracial marriage and cultural conflict. A story collection, Tina Shot Me Between the Eyes and Other Stories[6], explores the joys and pains of marriage and motherhood as African women cope with a society plagued by uncertainty and violence.

Professor Antoinette Tidjani Alou encourages those who are not familiar with Niger to focus less on the statistics. In a 2012 presentation for the Library of Congress (watch it here), Professor Antoinette Tidjani Alou discussed “The Secret Faces of Women from the Nigerien Sahel: Agency, Influence, and Contemporary Challenges.” Although Niger is a little-known country that faces many humanitarian crises, these dismal statistics should not be allowed to darken people’s view of the latent potential of this nation: “What we should not do with the statistics and which–what I propose not to do with them–is we shouldn’t deny them. But we should not claim and diffuse them as the whole story about Niger or Niger’s women[7]”. For instance, Professor Alou pointed out that Nigerien employers are required by law to allow nursing mothers to have an hour-long breastfeeding break before and after work[8]. She highlighted Niger’s consistent record of giving fourteen weeks of paid maternity leave to pregnant mothers[9], which is partially subsidized by the government. These encouraging steps of progress show that Nigeriens are striving as a nation to care for their women, so there is hope for continued progress in women’s rights. 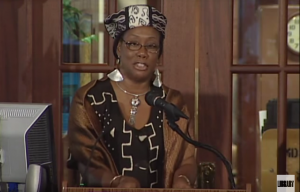 Like Professor Alou, Wells Bring Hope shares the same determination to enable Nigerien women to reach their fullest personal potential. Wells Bring Hope organizes a microfinance education program wherever a well is drilled. When women don’t have to spend hours walking to access fresh water, they have time to attend microfinance training sessions. Within six months, these women are able to launch their own micro-businesses and gain financial independence. If this seems incredible, remember Professor Alou’s words: “It’s…extremely important to remember the indigenous wellsprings of power, agency, and resilience that are part of Niger’s identity and part of the identity of Nigerien women. I think we need to use these wellsprings, these foundational wellsprings of power and agency and role models of women made at home as inspiration for action…[10]” Be inspired by the Nigerien women who are working towards a better life, and get involved with Wells Bring Hope today!