In a nation where the fertility rate is 7.5 children per woman[1]–the highest in the world–being childless is considered the mark of failure for a woman in Niger. Nigerien movie director Aicha Macky, herself struggling with infertility, bravely tackles the sensitive and painful social and psychological issues surrounding fertility in her first documentary feature, The Fruitless Tree (2016).

This isn’t the first time for Aicha Macky to speak up for Nigerien women about distressing but socially unacceptable issues. Her first film, Moi et ma maigreur (Me and My Thinness, 2011) addressed body image and the connection between thinness and AIDS in Africa. In 2013, she released her thesis film Savoir faire le lit (Know How to Make the Bed, 2013), which explored how girls receive–or fail to receive–sex education from their mothers. Her master’s degrees in sociology and documentary filmmaking give her both the cultural sensitivity and cinematic skill to produce a widely received, thought-provoking film that speaks for Nigerien women even when social norms wrap reproductive health issues in a cloud of shame. The Fruitless Tree received 50 different prizes at film festivals, including the Africa Movie Academy Award for Best Documentary,[2] and was pre-purchased by international channels, including Japan’s NHK[3]. 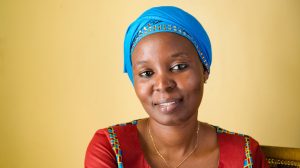 In an interview with She Does the City[4], Aicha Macky explained that she wants to raise awareness for infertility as a public health issue that needs to be addressed. What’s more, she wants to return women their humanity, “especially in Niger where a woman cannot be simply a woman without being a mother and a wife”. Not having children herself, she knows too well that the pain of being seen as a lesser person for not having a family is a devastating blow to one’s self-confidence. She asks the hard question that every oppressed woman has probably asked herself: “When people look down on you, you wonder how you’ve wronged them[5].”

Her documentary begins by addressing the title, which is also the derisive label that infertile women are called: trees without fruit. “Here, a woman is a tree, casting shade for her resting husband, for whom she bears fruit…I’m a tree that casts shade, but I’m merely ornamental[6].” Without children, women are seen as unworthy wives who are treated with suspicion and scorn, and ultimately replaced with cowives who can bear children for their husbands[7].  In some cases, it is the husband who is infertile, but still, women are completely blamed for the lack of offspring, which takes a high social and psychological toll. Aicha Macky speaks to her mother, who died in childbirth when Aicha was only five years old: “By giving life, you lost yours. Whereas I, I’m dying a slow death by not being able to give life.”

Despite her pain, Aicha offers glimmers of hope in her film. A letter tells of an infertile wife who was brought to court by her mother-in-law and tried publicly on the accusation of using witchcraft to keep her husband from taking a second wife. Her husband stood up and bravely confessed to the assembled crowd that it was he who was infertile, and his wife had sworn never to leave him.

Another woman tells of how her husband remained by her side through 19 years of marriage, turning down every offer from other women, despite the fact she was unable to conceive. These stories show that when women are valued as individuals and treated with dignity, there is hope for women to be able to lead positive, productive lives even without bearing children[8].

In addition to her film projects, Aicha engages young people in conversations about short films that address violent extremism and political conflict. She also speaks about social prejudice, which is violence even if it doesn’t involve shedding blood: “Verbal violence marks us for life and prevents women from emancipating themselves.” [9]

For her work, she has been awarded the Chevalière des Arts et des Lettres (Order of Arts and Letters)by the French Republic’s Minister of Culture. Although she is unable to contribute a child to society, through her advocacy work she contributes something even more important: the ability to start greatly needed conversations to bring about positive change in the way childless women are viewed in Niger and other places in the world. As she declares in The Fruitless Tree, “I believe I am able to affirm myself as a woman among mothers[10].”