The phrase “doing well by doing good” has been said many times to express the importance of making an impact with our altruistic actions. Documentaries like “Poverty Inc.” warn us about the dangers of giving to communities in need without allowing them to make a future for themselves. With good intentions, aid programs often displace local merchants with the donation of food and clothing in villages who once had their own goods economy. NGOs are becoming aware of these potential pitfalls and are adapting accordingly by ensuring that locals are involved in the development of long-term, sustainable aid programs that work to build on existing local economies and trade.

The Association of Unemployed People, in partnership with USAID, is a local resource that works to give young people in Niger the opportunity to learn trade skills. With unemployment on the rise after a shift in the (local) uranium mining industry, many young people were turning to illegal activity in order to provide for their families. The correlation between the high unemployment rate, mortality rate, and increased crime can be seen in countries throughout the world. In 2016, the association, with support from international aid initiatives, was able to refurbish sewing machines and secure training so Nigerien youth could learn to sew traditional clothing as a trade. Young adults who may have otherwise suffered from the decline in employment opportunities are able to take advantage of the two-year training program that includes sewing, knitting, and current events discussions. Students of the program are able to sell their clothing in the studio’s boutique and also take their talents back to their village to teach others.

Before the revitalization of the studio, only women were trained to sew in most villages. After the revamp, both women and men (ranging in age from 14-27) are able to take part in the training curriculum, and gain a very valuable skill set to provide for themselves and their families. The surrounding communities have shown support and excitement for the growing program, with many tailors hiring students from the studio to help in their shops. 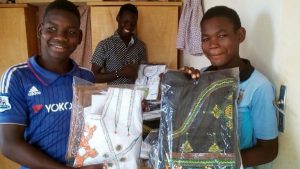 The positive effects of building sustainable opportunities for communities plagued with poverty and terroristic threats can be seen on both the smaller and larger scales in the change it has brought to the Agadez region of Niger. In addition to the trade program, community cohesion initiatives have worked to aid local citizens in detecting, preventing, and responding to threats of violence with awareness training and workshops. These programs hope to empower local organizations to identify at-risk youths, connect them to programs, and advocate for their needs and concerns.

With the inaugural class of students graduating from the two-year program, the sewing studio is still flourishing and even has a waitlist of young adults hoping to join future classes. The citizens of Agadez will hopefully continue to feel the social impact of a program that focuses on addressing financial, social, and emotional needs in their local and worldwide communities.