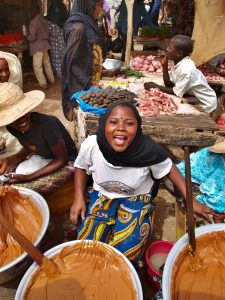 Each country or culture has its own cuisine and food specialties, and Niger is no different. The climate and environment of Niger play a crucial role in the types of food that Nigeriens eat.

Millet is a staple of everyday Nigerien cuisine. A common way to prepare millet is to pound it in a mortar and boil it to make porridge. The porridge is typically served with a sauce, and meat or fish. Other types of grains such as rice, couscous, noodles or bread are sometimes used in place of millet.

In cooler areas of the country (such as southern Niger and the Aïr Mountains), agriculture fares better and thus fresh fruits and vegetables are a larger part of the daily diet. In the riverine areas, fish is plentiful and often used in dishes where it is smoked, grilled, or cooked in sauces. For special occasions and celebrations such as marriages and holidays, more elaborate meals are prepared. Meat is often involved, particularly mutton.

The following are some specialty food items and dishes that are unique to Niger and West Africa.

Koulikouli is a greasy paste like peanut butter that is made with groundnuts. First, oil is separated from the paste so that only the dry paste remains. The dry paste is then rolled into balls, which are roasted or fried. The cooked balls are then eaten as is or ground up again and used as a condiment in cooking. Koulikouli is most common in the region of Maradi.

Kilichi is essentially what we call beef jerky. It’s beef that has been thinly sliced, sun-dried, and grilled. Common flavors of kilichi include salted, salted and spiced, and Koulikouli and chili powder-coated. Kilichi is commonly found in Maradi and Tessoua, where it’s often sold by vendors on bikes.

Halawa is a fudge made from sesame seeds, cane sugar and lemon juice. It’s usually sold as strips, bars or cubes.

Tchoukou (as it’s known by the Hausa people) or takomért (as it’s known by the Tuareg) is a hard, dry cheese made from cow, goat, sheep or camel milk. Salt is added, and then it’s dried in the sun. This cheese is commonly made in animal-herding areas to conserve milk in the dry winter months. Its taste may differ depending on the local variety. Favorite ways to eat it include slicing it and dipping it into hot tea, and crumbling it and mixing it into millet porridge.

What the Tuareg calls la boule and what the Hausa calls foura is a brew or porridge made from pounded and cooked millet. First, the millet is mixed with salt, spices, ground dates or ground cheese. The mixture is then rolled into balls and left to dry. For consumption, the balls are ground again before being mixed with milk or water.

Toguella is a bread made with wheat flour and water, and baked in sand that has been pre-heated with fire. The dough is placed directly on the hot sand, further covered in hot embers and sand, and left to cook. After cooking is complete, the bread is removed and dusted off. Toguella is commonly torn into pieces and dipped in sauce.

The Mechoui is a dish that consists of an entire sheep stuffed with couscous or rice that is cooked in a clay oven until the meat is moist and tender. This dish often appears during festivities and feasts.

If you ever get the chance to visit Niger, don’t hesitate to try some of these West African specialties!