Striving to Do It Better

In 2008, we set out to solve the water crisis in Niger, West Africa, to put an end to death and disease from contaminated water. We also wanted to put an end to women and girls as young as seven walking miles to get water. We’re doing that.

But there is something we couldn’t do then.

Let’s turn back the clock to January of 2009, our first trip to Niger. We saw villages without safe water and talked to women who lost children from contaminated water. Our hearts broke.

We also visited villages as wells were coming in, and we shared in that joy, but as I watched women laboriously use the hand pump to get water from the well, I winced. I thought, “Does it have to be this hard?”  A while later, I posed that question to Sam Jackson of World Vision, our partner in drilling wells. Is there an easier way to access water?

It was then that he told me about solar-powered, mechanized wells, big projects costing $50,000 and serving villages with populations of 2,000 or more. World Vision was beginning to implement these mechanized wells, which are markedly easier to use, but it wasn’t yet happening in Niger.

Sam said that if we wanted to learn more, we could be part of a project being done in Mali, right next door to Niger. With an investment of $25,000, we shared ownership of this project and were able to visit and learn more about these new water systems firsthand.

We talked to women who no longer had to pump up water—they simply turned on a tap. I spoke to a grandmother who was thankful that she didn’t have to depend on her grandchildren to get water for her. She experienced newfound independence, she said she no longer felt so old. 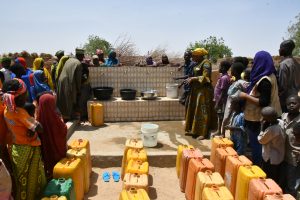 I spoke to a woman who was thrilled that she could now send her children to get water for the family, including her sons. Providing water was no longer a job for women, scoring “points” for gender equality! 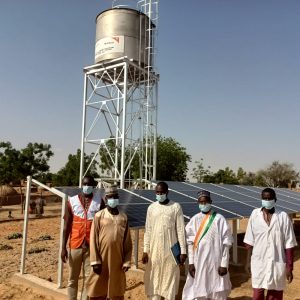 At that time, these big water projects weren’t cost-effective for us, so we waited until technology caught up with the need. We, along with the women of Niger, have waited a long time for this technology to become cost-effective, and finally, it has! As of September 1, 2021, we are funding only solar-powered, mechanized wells that draw water to a tap stand where safe, clean water is accessible at a tap, or faucet, much as it is here. It is a joy to see the burden of Nigerien women eased in yet another way, to help make their work more bearable.

You can support our work by making a donation of any amount here.