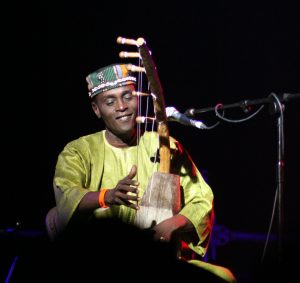 In the 1980s, a teenaged teacher would often entertain locals in the town of Tesker, Niger by playing the ngurumi, a traditional instrument with a calabash shell body and iguana skin head[1] that is often used by the Toubou people of northern Niger. The Toubou schoolteacher went on to become headmaster of a local school at the age of sixteen, but he still found time to continue writing songs for the ngurumi and developing his musical skill. Little did that headmaster, a young Malam Mamane Barka, know that he would go on to become another kind of master: an internationally recognized musician and guardian of traditional music.

Word spread of Mamane Barka’s mesmerizing tunes that celebrated the nomadic culture of the Toubou people, and he began receiving performance requests from across Niger and neighboring Nigeria as well. But Mamane Barka had even bigger dreams. He wanted to revive the popularity of a boat-shaped string instrument called the biram, which is native to the Boudouma tribe. In 2002, he was awarded a UNESCO scholarship to travel to Lake Chad to pursue the study of the biram with the world’s last remaining biram master, Boukar Tar. The aging master had all but given up hope for preserving this ancient art, but Mamane Barka rescued it from oblivion. After Mamane Barka had undergone numerous purification rites, Boukar Tar began imparting his precious knowledge of the biram and the lyrics to traditional songs. Before he died, Boukar Tar gave Mamane Barka his last biram, thus endowing him with the responsibility of bringing the biram onto the international music scene.

In 2005, Mamane Barka brought the biram outside of Niger for the first time with a performance at the Desert Music Festival in Rissani, Morocco. The performance was a success, and Mamane Barka’s international career took off with further performances in France and Germany. In 2008, Mamane Barka and his fellow musician, percussionist Oumarou Adamou, performed at the WOMAD (World of Music, Arts, and Dance) festival and were warmly received. They caught the attention of London music producer Paul Borg, who began recording with them in the prestigious Livingston Studios where they produced their first album, Introducing Malam Mamane Barka.[2]

The album featured lyrics in multiple West African languages, Boudouma, Hausa, Toubou, and Kanuri. The multilingual album celebrated Nigerien diversity and transcended tribal borders. Some songs celebrated the courage of tribal young people who face danger from wild animals, intertribal warfare,  and the threats of nature. Some songs pondered Niger’s rapidly changing society and the challenges that young people face in adapting to it.

Mamane Barka was deeply conscious of his life’s destiny: “I felt a responsibility to the old man and to his instrument. Before he died, I promised him I would show the biram to the world and so that’s what I must do,”[3] he said. Along with the widely popular Nigerien band Etran Finatawa, Mamane Barka formed a The Endless Journey. tour. They traveled to China, Japan, Pakistan, Morocco, Algeria, France, Germany, Spain, and Holland as cultural activists striving to celebrate and preserve their traditional culture. In the face of relentless modernization, their mission was to help young people appreciate and find pride in their musical heritage. The tour was also showcased in a documentary film and photographic exhibition[4].

In 2018, Malam Mamane Barka passed away. His death was deeply mourned by the international music community. Mamane Barka left a legacy of gratitude and appreciation for traditional culture. Throughout his lyrics, he consistently paid tribute to his teacher. One of his most well-known songs is “Boulanga,” a song which. Was previously performed by his teacher Boukar Tar. “Boulanga” expresses the loneliness of an old man whose friends have died before him. Mamane Barka studied the lyrical and musical structure of the song for several months before releasing it as an homage to his teacher. In “Doro Lelewa,”Mamane Barka sings the praises of Boukar Tar’s Boudouma village[5]. While pioneering new sounds with an ancient instrument, Mamane Barka honored the cultural traditions of his ancestors.

Niger is a nation rich with unique music and culture. Sadly, Niger’s beautiful and vibrant artistry is often clouded by the struggles of poverty and deprivation. When young people gain access to the education and resources needed to achieve their dreams, they can go places previous generations could only dream of. Join Wells Bring Hope in giving Nigerien young people a chance to stop the cycle of intergenerational poverty, so Nigerien youth can enrich our world with more amazing art and music.