In a country like Niger that is three-quarters desert[1] and has an eight-month dry season[2], drought is a constant threat. With extremely limited natural resources, aggressive grazing and farming practices take an enormous toll on the environment. Add a rapidly growing population and a strained ecosystem, and the result is food and water shortages. In the 1980s and 1990s, with the help of foreign NGOs, Niger’s government strove to alleviate the crisis with massive tree-planting programs, but sadly less than 20% of planted trees survived due to poor execution of the program. Locals were not involved or educated about the importance of reforestation, so most of the trees were cut down for firewood or to feed animals.

However, one reforestation technique has proved massively successful, resulting in 200 million new trees in just a few decades. No international organizations funded this project, rather, it is headed by local farmers. What’s more, it does not involve planting trees. It involves protecting trees.

A few decades back, Nigerien farmers noticed that crops planted under the Gao tree (winter thorn) yielded were four times more productive than those planted on fields without Gao trees. Unlike most other trees, the Gao tree loses its leaves before the rainy season and grows them during the dry season.  The Gao tree’s leaves drop and fertilize the ground just before planting season, making the soil beneath the tree so full of nutrients that additional enrichment is not necessary. The Gao tree’s massive root system draws nitrogen from the air into the soil, naturally fertilizing crops sown near the tree. 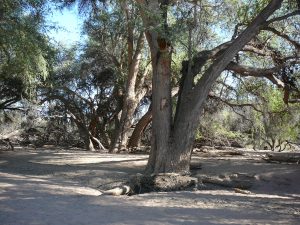 The Gao tree isn’t just important to the men who farm for their families,but also to the women who make medicine with Gao tree bark that they sell to neighboring villages. This additional income is put into the village women’s joint fund. Gao tree pods make nutritious animal feed, and fallen branches are used for firewood. In areas where Gao trees abound, women and children are saved from  walking many kilometers to find animal fodder and fuel for their families.

Because of all the uses of the Gao tree, villagers came to see the trees as a community resource that they needed to protect and nurture. In some areas, locals have organized patrols to protect the Gao trees from neighboring farmers or those seeking to cut trees for firewood[3]. In one village, a person caught cutting a Gao tree must be brought before the chief to explain his or her actions. If caught again, he/she will be fined[4]. In areas densely populated with Gao trees, World Agroforestry Centre scientists have observed that local farmers protect Gao trees by pruning the shoots and building thorn fences around saplings during the grazing season.

Niger’s success with protecting the Gao tree has attracted farmers from Burkina Faso, Mali and Nigeria to come to Niger to learn natural regeneration techniques–and has put Niger in newspaper headlines for positive reasons, which is a rare  occurrence for this struggling nation. Abasse Tougiani of Niger’s National Institute of Agricultural Research sums it up: “It’s a magic tree, a very wonderful tree.”

By helping Wells Bring Hope, you can bring some “magic” to Niger, too. Wells Bring Hope is the only safe water cause that provides women with microfinance training and continues working to educate and train villagers for 15 years after a well is drilled. Farmers are trained in water-conserving drip farming techniques[5]. Every well that Wells Bring Hope drills is a gift that keeps on giving.