The Tuareg and Agadez

Niger, West Africa, is not a place visited by many tourists, because there is not much to see, except for the northern part, most notably Agadez and the vast expanse of desert that lies beyond it, known as The Air.

Agadez is an ancient and important market town located in the desert,  northeast of Niamey, the capital of Niger. Constructed with clay and sticks, the architecture of Agadez is stunning and otherworldly. It looks like a relic of an ancient city, but it remains a lively and bustling town. It is an Islamic city with a mosque that is said to have one of the highest mud minarets in Africa. 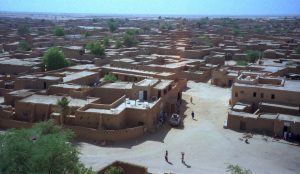 View of Agadez from the mosque – Source: Dan Lundberg

Agadez has a fascinating history. The city prospered because of its position as a trading hub. A century ago, it became the marketplace for everything merchants had to sell – salt, ivory, slaves, etc.   For over a thousand years, caravans have been bringing salt, which is a very lucrative commodity in this area, to Agadez. The caravans merge at Agadez to sell their goods after crossing the desert.

In Agadez, caravans can gather food for themselves and their horses and camels before they begin the next part of their journey. Their way of life is mostly unknown to the rest of the world. The caravans do what they must to endure droughts and constant conflict in the region. They continue to make their way through the desert and wander through the harsh lands they know so well.

In the 15th century, Agadez was the home of a Tuareg sultanate. The Tuareg are pastoralists who inhabit North and West Africa. Niger was taken over by  French colonialists in the early 1900s and their reign over the city was brutal until the Tuaregs, a large Berber ethnic confederation of nomads, fought against their cruel oppressors in an act of desperation and defiance. It took four months for the French to quell the rebellion. Even colonial powers could not easily defeat the mighty Tuareg in the region. The language spoken by the Tuareg is said to have been used by ancient Libyans. 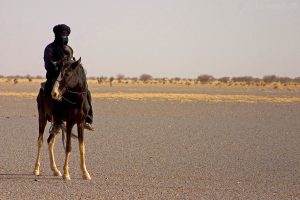 In 2010, it was estimated there were around 2 million Tuareg. Their lifestyle is ancient but fascinating. The Tuareg, in North Africa, inhabit the desert regions and live in feudal communities in tents and wield traditional weapons. It is apparent the Tuareg, noblemen, and clergy, are deeply entrenched in their culture and live according to their own laws. The Tuareg are considered “uneducated” by many, however, they are very intelligent and have survived the harsh landscape of Niger for thousands of years. They have preserved their ancient language and culture. They have learned everything they know from their elders. It is evidently a tough way of life, however, the caravans have survived for over a thousand years. It is a beautiful and otherworldly way of life.