In the past 30 years, Africa’s giraffe population has been reduced by 40% due to habitat loss, poaching, and civil unrest. In some areas, it has plummeted by more than 80% bringing some giraffe species close to extinction. The future looks bleak for many of Africa’s giraffes. But in Niger, home of the West African giraffe, a different story is unfolding. Giraffes are making a comeback thanks to a conservation strategy that has the government, conservation groups, and local communities working together to save them. 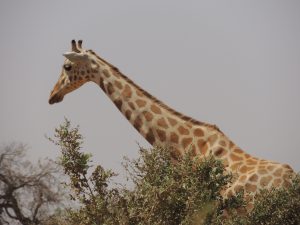 A hundred years ago, West African giraffes numbered in the thousands and their habitat stretched from the coast of Senegal to the middle of Africa. By 1996, the population had been decimated. Only 49 giraffes remained, and their habitat had shrunk to one small part of Niger. The West African giraffe looked certain to disappear forever. Under pressure from conservation groups, Niger became the first country in Africa to adopt a National Giraffe Conservation Strategy. Other African countries and the wider international communities have been slow to respond to the plight of the giraffe, in part because of a public misperception that the iconic animal is “everywhere” in Africa. Niger was the first country to recognize the severity of the threats facing giraffes and its conservation strategy has been remarkably successful. Today, there are more than 600 West African giraffes in Niger.

Niger’s conservation strategy was three-pronged. The government passed, and actually enforced, strict laws forbidding hunting and imposing jail terms and large fines for poaching. Recognizing the potential importance of ecotourism to Niger’s economy, the government also allocated resources to promoting giraffe-based ecotourism. Most importantly, the government also took steps to resolve ongoing conflicts between giraffes and local communities. This has been a key factor in the success of Niger’s conservation policy because it has brought local communities into the conservation effort and given them a stake in the outcome. 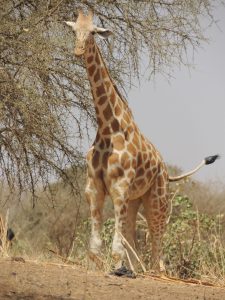 Most of Africa’s giraffes live in protected areas far from human activity. But Niger’s giraffes live on community lands alongside farmers, villagers, and nomadic herders, and they have to compete with people for scarce resources, such as trees and water. Giraffes eat 75 to 125 pounds of leaves per day; when people cut trees for firewood or to plant crops, the giraffes’ natural food source disappears and they must find other food to survive, which often means raiding fields and eating crops. Giraffes also get most of their water from leaves; without trees, they must compete with people for other water sources, such as lakes and rivers. The government tried to solve these problems by banning woodcutting in the giraffe zone, but people ignored the law because they needed firewood. Better solutions were required.

The government and conservation groups have adopted a variety of solutions designed to provide viable alternatives to woodcutting, poaching, and other activities that harm giraffes. To reduce deforestation and preserve water sources for giraffes, they provide free firewood and drill wells for local communities. To reduce poaching, they bring local people into the conservation effort to assist with protecting giraffes, including training local guides to track the giraffes’ locations and behaviors. They also educate local communities on the cultural and economic importance of the giraffe, provide strategies for avoiding human-giraffe conflict, and create local committees to resolve conflict. 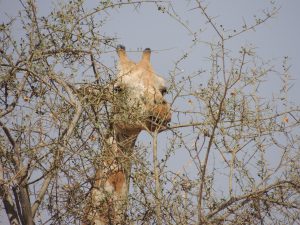 Women have also played a key role in Niger’s conservation strategy. For example, to combat deforestation, local communities established nurseries to grow seedlings and have replanted thousands of trees, with women sowing the majority of the seeds. In addition, many women have received microloans to start small businesses, such as raising and selling livestock, in return for pledging to be “pro-giraffe.”

Because of Niger’s conservation efforts, local communities view giraffes as bringing aid, development, and eco-tourism to the region rather than as a threat to their livelihoods. The future of the West African giraffe is still far from guaranteed, but Niger’s success has made it a model for other countries, such as Kenya and Uganda, which are now developing their own national giraffe conservation strategies.