The Women Revolutionizing Music in Niger

Every culture enjoys music regardless of its purpose. Whether it’s a tradition, used to sooth a child, or to tell a story, music is a part of our lives no matter where we live. Culture shapes music, and music undoubtedly influences culture. Music offers an outsider insight into unfamiliar cultures and into the lives and emotions of people they’ll never meet.

A group of women, within the Tuareg society, are revolutionizing Niger’s traditional village music. The Tuareg are a group of nomadic people living throughout the Sahara. The society is known for it’s style of traditional folk music called Tende, in which a guitar and a goatskin drum are played. Tende music is characterized by the drum, the style of playing and the events during which it is played. Tende music is often played by women and typically performed at ceremonies and festivals. It also serves as a activity for evening entertainment. 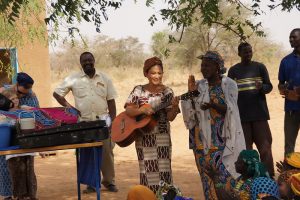 Connecting the world of tende music to the modern world is a woman named Fatou Seidi Ghali. In her small village of Illighadad in central Niger, Ghali secretly taught herself  to play the guitar. With her cousin, she formed the group Les Filles de IIllighadad, which translates to The Girls of Illighadad. In Niger, the guitar is typically played by men who used it to replace female vocalists when performing tende. Ghali is one of only two known female Nigerien guitarists.

With gender norms informing music throughout Niger, Ghali is breaking new ground as a leading female guitarist. Her group is not only reclaiming the importance of the Tuareg guitar, but also empowering women to innovate their traditional music and create an entirely new genre of music. Les Filles mostly performs folk songs that they grew up with and adapted to be played with the traditional tende drum and the acoustic guitar. In 2016, the duo released a six-song self-titled LP recorded by Sahel Sounds,which featured the group in their hometown to transport the once rural sounds to the world in 21st century. In 2017, the group toured Europe to celebrate their talents and inspire other women.

Ghali invested her earnings in cattle for her family to show women the power of music and what it has made possible for her and her family.  Currently, Ghali might be only one of a few women guitarists in Niger, but she is helping to bring attention to her village and paving the way forward for other women.

Beyond, Strange Sounds From. “Les Filles De Illighadad: Daughters of the Desert.” STRANGE SOUNDS FROM BEYOND