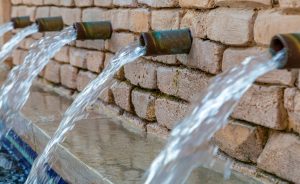 Located on the banks of the Niger River, Niamey is Niger’s capital and largest city. From lively markets and ornate mosques to national museums and the striking Niger River, there is much to see and do in Niamey. However, the city offers one less-than-appealing sight as well –  heaps of trash littered in public places.

Niamey’s waste collection system is only capable of managing about half of the daily waste produced by its residents. The consequences of this go far beyond aesthetics. In the rainy season, the uncollected garbage blocks drains, which leads to stagnant pools of water that breed mosquitoes. These pools of polluted wastewater eventually run off into the Niger River, which supplies the city with drinking water.

The water supply network in Niamey needs improvement to meet the needs of its residents, and this has necessitated the construction of a water purification plant. This plant will extend the water supply network in Niamey. The Goudel (Iv) purification plant is being constructed by the Spanish company, Denys SAS, which aims to supply 40,000 m3 of water per day. As part of the project, Electrosteel France will supply the pipes that will transport the water from the plant to Niamey city. The Agence Française de Développement (AFD), the European Investment Bank (EIB), and the Netherlands financed the project. It is an ORIO project funded by the Dutch Ministry of Foreign Affairs to support public infrastructures in developing countries. Thanks to this global initiative,  the residents of Niamey will soon be better able to protect themselves against deadly diseases such as coronavirus, cholera, and typhoid.