Water Scarcity: A Not So Perfect World

As a teenager in the process of learning more about our planet, I have come to realize what some people go through on a daily basis in order to get something that is always available to me—clean water.

About 844 million people lack access to clean water, which is close to three times the population of the United States 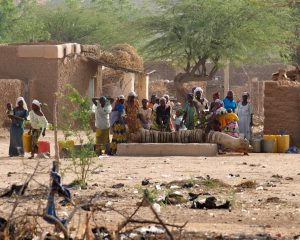 Women lining up for water in Niger

One of the main causes of water scarcity is climate change. The World Wildlife Fund website mentions that as humans continue to let more greenhouse gases into the atmosphere, weather patterns will keep changing around the world. Desertification (the process of fertile land becoming desert as the result of drought) is an effect of climate change that causes many water resources to dry up. Without these water resources, vegetation, plants, and trees aren’t able to grow.

Not only are there non-profit organizations contributing to solve this problem, but 196 nations have also united to fight and adapt to climate change. They have all signed an international treaty, the Paris Agreement, which has a long-term goal of reducing greenhouse gas emissions to achieve a climate-neutral world.

As people become more aware of the effects water scarcity has on the world, we have to start taking some action in our own lives. My generation can also contribute by building awareness about innovative water conservation projects. For example, desalination plants take ocean or seawater and remove salt from it to provide drinking water. One article, published at the Yale School of the Environment, states that, according to the International Desalination Association, 300 million people around the world now get their water from desalination.

In addition, here are some habits we can all acquire in order to save water at home:

A big issue that I struggle with is not finishing the water bottles we grab to drink. Without a second thought, I toss a water bottle when there is still water left to drink. In order to stop this bad habit of mine, I have started to write my name on a recycled water bottle and only fill it up to the amount of water I believe I will finish.

If no action is taken to solve this problem, by 2050, at least 1 in 4 people will likely be affected by chronic fresh-water shortages. The simplest things like donating to non-profit organizations or taking shorter showers can help many people around the world have access to clean and safe water. So let’s start our journey today!