A School for “Model Husbands” to Promote Maternal Health

In Niger, where the fertility rate is seven children per woman, men are called upon to change attitudes.  At the end of February, about ten men sat cross-legged on a mat shaded by the foliage of a neem tree. These “model husbands,” were gathered for class in the courtyard of the health center of Sona, a small rural town on the banks of the Niger River located 85 km from the capital, Niamey. They were not studying algebra or geometry, but rather, the story of the wildly rising curves that represent the illnesses and deaths associated with childbirth. Despite limited formal education, the farmers endeavored to learn and promote the basic rules of maternal health with the aim of saving lives and limiting births. 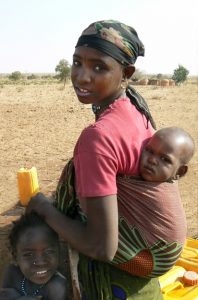 Historically in Niger, 30% of girls are married before the age of 15, 76% before 18. Forty-two percent of women are mothers before 17, 75% before 19. Giving birth is not without risk, because the country is under-equipped with health facilities. Every two hours a woman dies in childbirth or from its consequences. In the same interval, six newborns lose their lives.

The idea for The Husband School came in 2007, taken from a study carried out by Nigerien sociologists. It emerged that men are a major obstacle to improving the health of their wives, and without them, there will be no solution.

The Sona health center is the only one for the fifteen surrounding villages and their 16,000 inhabitants. In 2013, there were only 14% assisted deliveries. Today, 55% of women come to give birth here. This is all thanks to the Husband School. As in sports, where not everyone can be on the team, not all men are eligible for Husband School. They must meet nine basic criteria such as being married, available to others, having good character, supporting a family … and agreeing to participate on a voluntary basis, without remuneration.

Slowly, the word has been carried from village to village. The network now has more than 1,000 schools spread across the country. But there is still a long way to go before attitudes change radically.