A Taste of Nigerien Cuisine

The U.S. offers a wide variety of restaurants: Italian, Mexican, Indian; so many fast food places you have to close your eyes not to see them. It’s intriguing that people consider these cuisines a staple in the United States, but don’t think much about their origin. I’ve recently started wondering what West African food tastes like, particularly food common in Niger.

I started by learning about Nigerien etiquette. If you ever dine with Nigeriens, there are a few rules you should know. First, don’t eat in front of another person without offering to share, and if someone offers you something, it’s best to accept. When arriving at someone’s home, inquire about their health and family before discussing anything else. At the dining table, wait for those older than you to begin eating. Eat and pass the food only with the right hand. Traditional tea ceremonies come in three rounds, with more sugar added each time: the first cup is bitter as death, the second mild as life, and the third sweet as love. This tradition represents the strengthening bond between host and guest, so be sure to drink each cup.

I continued on to learn about common meals in Niger. A full meal includes a starch, grilled meat, and vegetables topped with sauces. In my search for the most authentic Nigerien food, “millet” appeared over and over. Millet grain is a staple food because it grows quickly and is versatile enough to survive droughts, infertile soil, and dry air. With irrigation and soil supplements, crops can leap up to four times their normal growth, which is another reason why better access to water is crucial for sustainability. Because of its popularity in Niger, I wanted to try it out. The recipe comes from The Global Reader, and I included pictures to show how it turned out for me. Millet is much less common in the United States, but I found it in an organic grocery store. Normally, millet is pounded into flour and made into a porridge, called “tuwo” in the Hausa language. I didn’t pound it for this dish, so it has a consistency closer to rice. 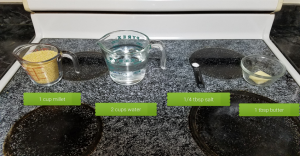 Millet is usually paired with a sauce, so I made one out of spinach and tomato sauce from International Food 4U. I cut their recipe in half and ended up with 3-4 servings. The gist of it is to stir the ingredients into boiling water until the spinach is tender. 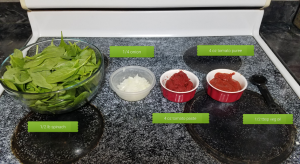 I also decided to try fried plantains. They’re a popular snack throughout West Africa, usually spiced with something hot like chili pepper. The recipe comes from Cuisine En Folie. Make sure to fry them when they’re green or else they’ll be too mushy. The thinner they’re cut, the crunchier they are. I’ve never eaten plantains before, so I was surprised how similar they taste to potato wedges. They’re also incredibly filling. I snacked on them while cleaning up and realized I was almost too full to eat the main dish! 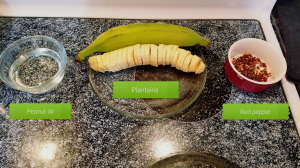 And here’s the result! The millet is good enough to eat on its own, but the sauce added a tangy flavor to the slightly nutty taste of the millet. The plantains I ate just like chips. I came across several other Nigerien recipes. Based on the success of this first dish, I look forward to making more! 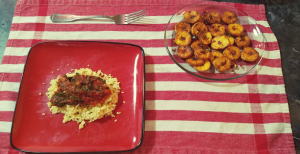