Curious How “Niger” Got Its Name?

Place names serve obvious practical purposes – they literally put us on the map, telling others who and where we are. Names also help form our identities, hold our histories, and often communicate something about how and why we got here. This is particularly true for countries like Niger, which have been shaped by the geography that informs their names. 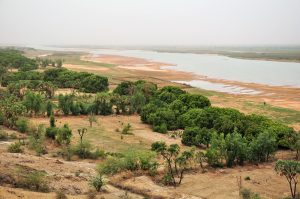 As a result of the historical loss of written records, the exact etymology of the word Niger is unknown. Many scholars believe it comes from the Taureg word, egereou n-igereouen, which means “big river/sea,” or as translated into Arabic, “river among rivers.” Unsurprisingly then, the country of Niger shares its name with an actual river. The Niger River slithers through a landlocked section of West Africa, covering about 750 miles (1,200 km) from north to south and about 930 miles (1,460 km) from east to west, forming part of the border between Benin and Niger. The Niger River is the third largest river in Africa, running through Guinea, Mali, Benin, and Nigeria in addition to, of course, Niger.

The river has many nicknames. Locals may call it Jeliba in Manding, Isa Ber, which means “big river” in Songhay, or Joliba, a Mandigo word meaning “great river,” but the name “Niger” is the name used worldwide. The different slang names indicate how this water source is related to a variety of people who further subdivide their identity and their sense of community.