I’m a new blogger Wells Bring Hope, so in deciding my first blog topic, I figured I’d start by looking first into Niger – its size, its water resources to see what rabbit hole I fell into from there. I have a background in science and am keenly interested in public health, so naturally I was drawn to the health aspects, particularly waterborne diseases. So, I thought I’d start off my barrage of blogs by doing a mini series on waterborne diseases and sanitation. So, first, let’s start with some basic information on Niger, water sources, sanitation, and a bit about waterborne diseases.

Niger is a country in West Africa that spans 489,076 square miles, only 116 of which contain water. To put this in perspective, the size of the land mass is almost twice that of Texas, with the amount of water one tenth of the size of Rhode Island. It’s a landlocked country, with a mostly dry, desert climate and recurring droughts. Water scarcity is a severe problem, causing women to walk hours each day to find water that is often not from a protected source.

The good news is that as of 2015, the country had 100% of its urban population using improved drinking water sources. This means their water was coming from a piped water connection, a dug well, a protected spring, or a form of rainwater collection, and as such, was safe from outside contamination. The bad news is that 41.8% of its rural population remains on unimproved drinking water sources, which run the risk of rampant contamination. 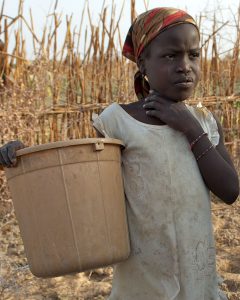 Improved water sources are one way to reduce water contamination; improved sanitation is another. Improved sanitation means there is a piped sewer system, a septic tank, flushable toilets, or a pit latrine with a slab. The main goal of sanitation facilities is to separate human excrement from human contact. As of 2015, 89.1% of Niger’s population was without improved sanitation sources.

Waterborne diseases cause high levels of morbidity and mortality in developing countries, with diarrheal disease being one of the most lethal enemies. This tends to run especially high in children younger than five years of age, and in areas where water scarcity is a problem.

The good news is that organizations like Wells Bring Hope are working to improve drinking water and sanitation. Whenever WBH drills a well, the villagers must also construct pit latrines and receive training on proper hygiene. The combination of safe water, effective sanitation, and improved nutrition results in a 70% reduction in child morality. By simply drilling a well, we can come together to save millions of people from the pain, suffering, and in many cases, death, caused by waterborne illnesses. 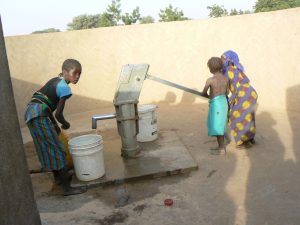 As the World Health Organization says, “No other humanitarian intervention produces a more dramatic effect on life than access to safe water and sanitation.”