The Languages of Niger: Hausa

Niger is linguistically diverse, with over twenty languages spoken in everyday life!

French is used for professional communication and official proceedings. Indigenous languages are a way for members of a specific ethnic group to converse, but they are rarely spoken outside that population.

Hausa, however, is an exception to that rule. Hausa is the most widely spoken language in Niger and can primarily be found in the southern region of the country. In Niger, around 53% of the population speaks Hausa. The language has been adopted by many as a lingua franca (a common language) in Niger. So, what makes this language unique? And why do people speak it? 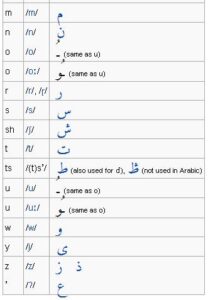 Hausa is a fascinating language with numerous noteworthy elements. Compared to English, Hausa is a remarkably complex and layered language. For one thing, Hausa can be written in two scripts. The Arabic ajami is the older of the two. While this script has diminished in popularity, Islamic scholars still use it. The other script is based on the Latin alphabet, and known as boko. Boko became the official Hausa alphabet in 1930, and is overwhelmingly used today.

Another interesting attribute of Hausa is the grammatical complexity. Forming plurals is notoriously difficult, and much more complicated than simply tacking an “-s” onto the end of a word. There are somewhere between ten and seventy different ways to form a plural.

Another feature of Hausa’s grammar is that a pronoun has to accompany every single verb. The pronoun helps to determine what the tense of the verb is. English speakers are often perplexed by this rule.

Like Chinese, Hausa is a tonal language. This means that changing the inflection of your voice can change the meaning of a word. Tonal languages are often described as musical due to their fluctuating melodies and pitches. But, Hausa is not unique in its reliance on tone. In fact, many West African languages are tonal. On the other hand, there are very few European languages that could be considered entirely tonal. Interestingly, tonal languages offer some advantages to speakers. On average, those who speak tonal languages have a better understanding of pitch than those who do not. They also can pick out scales and tones easier. So, musicians may want to consider learning a tonal language.

Hausa is widely spoken for a couple of reasons. Notably, historical influences have led to the emergence of Hausa as a lingua franca, especially for trade. This development is commonly attributed to the effects of the Hausa Kingdoms (also known as Hausaland). This was a collection of Hausa states that were once spread between Nigeria and Niger. Although they prospered in the 1400s-1700s, their influence is still felt today.

If you are curious and would like to hear some basic conversational phrases in Hausa, click here.