Much has been written about Niger and the challenges it faces. According to the United Nations Human Development Index, Niger was ranked 187th of 188 countries in 2015 and 189th out of 189 countries in the 2018 report. The nation has grappled with a range of issues due to its land-lock position including inefficient agriculture, high fertility rates, poor educational levels, lack of infrastructure, poor healthcare, and more. Niger also suffers with security issues because of the cross-border influx of terrorists and  militant groups as they can easily cross the borders without having to cross the ocean. Besides, a land-lock country may also suffer with the sense of physical isolation as people feel they are unfortunate to depend on other countries and they end up having a local mindset instead of an international and open minded one. In this situation, old mindset kings can take advantage of the environment and will have more power and chance to rule the country for longer time besides  inhibiting  the progress of the nation .

Despite all the difficulties people in Niger face, have succeeded in keeping their traditions and culture alive. One example of this is the Gerewol Festival, which has been celebrated by the people in the Tahoua region for centuries. The weeklong festival is a ritual courtship competition held by the Wodaabe Fula people each year.  During Gerewol, young men wear traditional face paint and elaborate ornamental dress. They then line up to dance and sing in order to attract the young women in the village. It’s basically a male beauty contest! 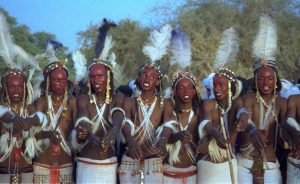 The Wodaabe people value height and bright white teeth and eyes in men, so the male beauty contestants will roll their eyes and bare their teeth during the dance to impress the young women who are evaluating them. The judging is tense, with the young women walking down the line of dancers, poker faced in accordance with the Wodaabe pulaku, or code of behavior. Then woman each taps her favorite man, and everyone rushes in to celebrate and congratulate the winners – being selected is a huge honor. The women then return to their camps and wait. If the chosen men like them, they follow. 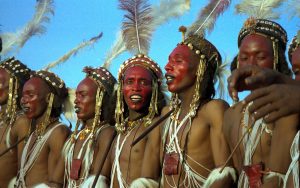 Thanks to documentary films and National Geographic articles about Guerewol the ritual has become more widely known in recent years. Occasionally, foreign tourists can be seen taking in this unique courtship ritual.

Since the festival can only be held if there is enough water to support the hundreds of people that the festivities attract, Guerewol is not held during times of severe drought. More recently, instability caused by the insurgency of Boko Haram has resulted in less frequent Guerewol festivals. Forunately, the traditional dance can still be seen at tourists hotels in eastern Niger where it is performed by troops of Wodaabe. Hopefully, these staged performances will help to preserve the tradition for future generations of Nigeriens.