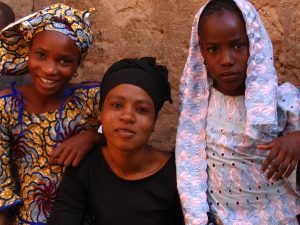 In January of 2019, NPR’s Rachel Martin interviewed Dionne Searcey, West Africa bureau chief for The New York Times, about a startling change in the social fabric of Niger:  women now feel empowered to initiate a divorce.

Prior to having safe water well in their rural village, Nigerien women walked miles every day to get water and thus could not work and earn money for their families.  When a well is drilled, women have over 50% of their time freed up to work and earn money.

With that comes a sense of accomplishment and pride and a newly shaped identity marked by greater confidence and independence. Women who work and earn money have more choices and, as Dionne Searcey, tells it, they feel empowered to initiate a divorce.

In prior generations, a marriage partner was chosen by a young girl’s parents and the arrangements were made for the economic betterment of the bride’s family, who may have had too many mouths to feed. Rarely was a marriage based on love. One thing that the NPR article didn’t address is that in Niger, some men have more than one wife. Often when a man did well financially, a sign of his affluence was taking on an additional wife. While some families with multiple wives co-exist peacefully, it is often a source of difficulty for one or more of the women. This is another compelling reason for wanting to get a divorce.

In the NPR interview, Dionne Searcey described a divorce court that took place on a public sidewalk, not unusual in Niger, where the judge’s bench was a sheepskin rug. With cars driving by and surrounded by a large crowd of men, she found it difficult to hear.

She told NPR that she went to Niger to explore a story about forced marriage and child marriages but the sight of an Islamic court judge on the street caught her attention. The judge informed her that there had been a noticeable increase in the number of divorces in Niger overall, including ones that were initiated by women.

Searcey was curious why this was happening. She spoke with a teenager named Zalika, who said that she had met a man at a wedding at a time when she wasn’t even thinking about getting married.

Searcey learned, “She told me she didn’t find him particularly attractive, but he was nice to her mom. And she thought they could have a nice life together. She acknowledged that many relationships start to fade as time goes on.  He didn’t want her to work, and she wanted to work. So every day, she sat inside her house and just stewed. Then she got pregnant, and when she was in labor, he didn’t even come to the hospital. And that was enough for her.”

Several other factors have contributed to women feeling a greater sense of freedom to initiate divorce. With both husband and wife earning money, more families are moving to the cities, where there are greater mobility and freedom. Women selling goods in a larger marketplace have greater exposure to the media, radio, and TV shows that depict women leading more independent lives. That helps them see what their lives could be.

Even though divorce has always been legal in Niger, in this very traditional country, a woman’s place was always in the home. Some mothers who stayed stuck in loveless marriages for many years felt that it was their daughters’ responsibility to do the same. Others wanted more for their girls, knowing that it could be possible for them to marry for love.

Searcey reported that women going through a self-initiated divorce expected to find another husband but wanted to marry someone they loved. This is a major cultural change in Niger, one that bodes well for women as they continue to strive for social as well as economic equality—another positive effect of expanding access to safe water wells.