Horse racing, camel racing, football, and rugby are among the popular sports in Niger. Nigeriens have medaled twice in the Olympics, winning a bronze medal in light welterweight boxing in 1972 and a silver medal in taekwondo in 2016. As Kate wrote in one of her posts, one man even represented Niger, which is  80% desert, in the Olympics rowing competition. But none of these sports holds the same cultural value as wrestling, which is known in Niger as the “King of Sports.”

Wrestling started out as a spur-of-the-moment game. It eventually became more popular during festivals, when people from different provinces would compete against each other. Sorro wrestling originated during these occasions, and it is practiced only in Niger. The aim is to get any part of the opponent, besides the feet, to make contact with the ground. Competitors play against every other competitor, and the one with the most wins is declared champion. 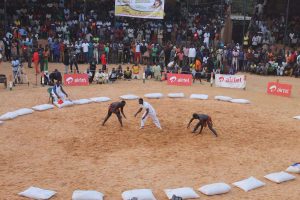 Each year, 80 wrestlers compete over ten days in the Traditional National Wrestling Saber. Ten representatives come from each region of the country, accompanied by supporters and the spotlight of Nigerien media. Spectators pay not only for the wrestlers, but also the clowns that run about the arena, the music and dancing, and the griots—musician poets who recite praises before the match. The griots honor the wrestlers by performing takes, bold, rhythmic, creative, and sometimes humorous songs about the wrestler’s skills and previous victories. Following is one from the national championship of 1983 in Hausa:

What belongs to us is ours indeed.

And the next day,

If fortune smiles on us.

I saw a whirlwind, a bad omen and a lying one,

The day that Salma got himself trapped.

Suddenly, they charged at each other.

To wrestle with a beginner is a delicate matter

Or indeed with a sorcerer,

Or yet with a marabout.

But the strength of Kassou is not that of one man alone!

The wrestler himself also chants a kirari (self-praise), perhaps wearing a gris-gris talisman for luck and strength. Many competitors strongly believe in charms and incantations, spoken as they enter the arena. A fathia (prayer), is offered, and the Minister of Sports gives a speech, speaking of peace, cultural identity, and friendship. The winner receives a monetary award, a boubou robe and turban, a horse, and the ceremonial saber. Both winners and losers receive kari (gratuities) from the audience. Wrestlers compete more for the game itself rather than the award, and often share money with griots and inexperienced wrestlers. This year’s winner was Tassiou Sani, representing Zinder. The tournament will continue next year,  carrying a cultural tradition reflective of Niger’s unity, strength, and resilience.